The following is a summary of Jeff Ferguson’s (@countxero) live tweets of the Facebook new product announcement on July 6, 2011 with additional, post announcement commentary.
Live tweeting the Facebook Live session featuring Mark Zuckerberg who has promised a “big announcement” #zucklive 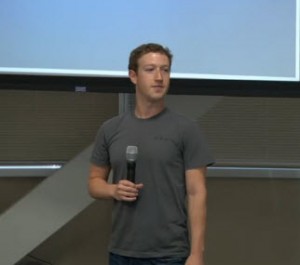 I love the way business works sometimes.  I’m sure Mark Zuckerberg and crew had an announcement planned for the new Facebook features launched today (group chat, video calling, redesign), but the launch of Google+ last week obviously rattled their cage a bit and they had to make something bigger about the announcement.

The amount of stuff shared on @Facebook has doubled from 2010 to 2011 and will continue to do so. #zucklive

The use of “stuff” here was not unintentional; Zuckerberg kept referring to the variety of things shared on Facebook (video, photos, links, etc.) as “stuff” over and over again.

We can dig this.  After moderating a panel and speaking at AFExpo last week, one of the best takeaways I can give people about social media is that it’s not about the quantity of the followers, but the quality of the interactions those followers have with your brand.

This is nothing new; As long as I’ve been in advertising, there’s always some intermediary metric that people follow instead of following the money.  Back when I first started in 1995, it was clicks and CTR, which are still looked at for all the wrong reasons; now it’s followers and likes.

In case you were wondering, you should be really impressed with that number.

Finally, the big announcement: In hindsight, I was surprised he lead with Group Chat, because it existed already, but has been revamped for more “ad hoc” use.  The New Design is probably nothing fancy, but the real star of the show turned out to be Video Calling, which is really just an integration of Skype into the Facebook interface.

I shouldn’t say “just” here, this is going to be huge for Skype and I’m sure Facebook users will eat it up.  One of the things I’ve always had a problem with when trying to get friends and family on Skype was reminding them to download it, then set it up, etc. etc.  Now, it’s just built into Facebook, something everybody you know is probably using already.  Brilliant.

This is almost an exact quote from Zuckerberg and an obvious dig at Google and their Facebook clone, Google+.  Basically, he’s saying that Facebook is all about Facebook and will continue to push the development of the Facebook concept forward.  Meanwhile, he obviously thinks Google is an also ran in the social media space who is just trying to catch up with everything they built.

You could say that, but you also have to remember that Facebook is just an also ran that did better than its predecessors in the social media space.  The recently bargain basement sold MySpace pre-dated them by quite a bit, Facebook just did it better.  Plus, Facebook isn’t the same Facebook that started a few years back, it’s pushed its own boundaries and is off in a dozen directions as well.

Watch out Zuck, one day, someone will claim you’re just catching up to the new kid on the block.

Looks like all the new features on @Facebook are rolling out today, including video chat. Guess I better put on some pants… #zucklive

As I write this, I haven’t been updated to the new version just yet (weird, did they start in the Midwest or something?), so all I can speak to is what I saw at the demo.  That said, it looked like it was pretty seamless and easier to use than the standalone Skype.

I didn’t catch the dude’s name, but he was a really great presenter and made Zuck look like he needs to take some speech classes.

Tony Bates, CEO of @Skype takes the stage. Integration is a great next step for these guys, download was always an odd step. #zucklive

It was great to hear Tony get a round of applause with his introduction.  He’s in for a nice payday when the Microsoft sale wraps up and the Facebook integration will make it just that much better.

Skype’s paid features are things like Skype to phone number calling, international calls, and a few other cool features.

I’m currently working on a business plan for a freemium model similar to Skype and via my research I discovered that only 10% of Skype’s audience pays for anything on the service.  It doesn’t sound like a lot, but with the right model, that could still mean a ton of revenue.

@benparr of @mashable gets first question on possibility of group video chat (available on @skype, would be cool) #zucklive

Group chat is a feature in the existing Skype service now and a fun one if everybody has all the tech set up properly, so it would be really cool if Facebook integrates this feature as well.

I’ve probably met Ben Parr a half dozen times at shows, but I doubt the dude will ever remember me until the day I have a startup that really turns him on. Anyway, he’s one of a couple of people at Mashable that is just known to start s**t with people and…

What a shocker! Zuckerberg dodged this question, basically saying that he and the team haven’t had much time to look into Google+ Hangouts (honestly, I haven’t either. I’m still gathering friends at this point).

I ended up speaking on the Facebook Places panel at the AFExpo last week along with Greg Sterling, who I have met previous while working at Local.com.  I’m really just a big name dropper, so I don’t really have any commentary here…

RT @feliciaday: I’m not particularly vain, but all this vid chat makes me think, “UGH, so I gotta do my hair & makeup every day?!” #zucklive

Felecia Day is one of the “geek queens” of the internet, writing and acting in the World of Warcraft/YouTube hit, The Guild. She is an actual geek girl, so her commentary into tech sector can be quite insightful, if not occasionally funny.

Finally, the money question… what’s in it $$ for @skype (and @microsoft) and @facebook… dodge, dodge, dodge… #zucklive

I wish I could remember who asked this question (I think it was CNET), but… finally.  Of course, there is no real answer provided during the Q&A, but I’m sure it will come up again.

BTW, who didn’t bother to check the audience overlap between @skype and @facebook? Not a stumper question for @compete @comscore #zucklive

This is a reference to an earlier question that I tweeted out of order, but basically, a reporter asked what the audience overlap was between Skype and Facebook.  Hopefully, somebody at one of those two services sees my tweet and responds.

There was some chatter and thank yous before they sent the reporters/bloggers to offline questions and free food, but they ended the stream with a new “commercial” of sorts announcing video calling with Skype.  It was particularly sappy and reminded me of an Apple Facetime commercial, but I’m sure it was effective as hell, so what do I know.

In summary, Google+ spooked Facebook a little, so they needed to do more than usual for this announcement (or at least do it sooner).  In a post announcement question, Ben Parr quoted Zuckerberg as saying that “Google+ is a validation of Facebook’s vision,” which is classic Zuck, but a valid point.

Probably my only real head tilt here is that with more features like video calling, Facebook takes another step towards the “walled garden” model that keeps people within Facebook as much as possible.  Sure, this increases impressions for advertising, but it didn’t work out so well for AOL and Yahoo in the past.  Hopefully, the face that Facebook’s ability to share other websites so easily will help keep that wall low enough that people can come and go as they please.

PS – Amplitude Digital launched a new “Social Media Audit” at AF Expo last week(we didn’t do a press release or anything, we just chatted up a few reporters).  Anyway, the social media audit, like our other audits, provides you with a great way to get started in social media without just telling you to do Facebook and Twitter.  If you’re ready to take that big step into a larger world, give us a shout.